I apologize that this recap is late as well. At least it's before Gen Con 2019 and not as late as my Gen Con 2017 recap! As before, my memory ain't what it used to be, so I'll do my best.

Wednesday
This year I carpooled with Vic, one of the Chicago Area Game Writers Colloquium (CAGWIC) regulars. We had a lovely discussion of the gaming world we live in and life in general.

Once we settled in, I headed over to the Crown Plaza ("the Train Hotel") to attend Monte Cook Games GM Meet and Greet. They went over the general guidelines, answered any questions, and handed out some very nice GM materials (which I will recap below). Somebody also brought in some MCG-themed cupcakes! They were yummy! Monte Cook Games is a great company to run games for. If you get a chance, sign up to run for them, at Gen Con OR your Friendly Local Game Store!

Back at the hotel, the first game of Gen Con 2018 was Photosynthesis by Blue Orange Games. I've been wanting to play it for a while as it is always so pretty setup in the demo halls. Brad brought his copy and set it up for us. It's such a beautiful game with a strategy that changes every round. There was a race for the middle, but Brad pulled out the win with his own private grotto. Good game gents!

We finished out the first night with Hellapagos by GigamicWorld. It's what you would call a 'coopetitive' game. I think 10 of us were playing. We all start as shipwreck survivors on a remote island. There is just enough food and water to last us two days. Initially, we are trapping water, fishing for food, gathering wood, building a raft from said wood, or scavenging the wreckage for supplies. That didn't last long. I ended up drugging friends to steal their supplies and then claiming immunity when getting "voted off the island" (i.e. dying from lack of food or water). I made it to the final four. It looked like there was only enough supplies for two people to escape the island, so with the two bullets I scrounged, I shot DJ and Brendan. DJ deflected the bullet with a scrap of steel and then produced enough sandwiches to save more than four people. Shashank said I didn't have to brutally murder Brendan as he had a machine that converted food to water. Too little to late, my friend; bullets travel faster than food processors! So, DJ, Shashank, and I made it off the island and escaped the hurricane. In an ironic twist, that would be the last game I would "win" at Gen Con 2018.

Thursday
Adam, Tyler, and I decided to brave the rush and tackle the exhibit hall first. Brad asked us to hit up the Smirk & Dagger booth to pick up a copy of Tower of Madness for him.

Since I was close, I headed over to the R. Talsorian booth. A long line was forming. Apparently, the Witcher RPG has a big following! I waited in line so I could find out when to expect Cyberpunk Red (later 2019 - Jumpstart Kit at Gen Con 2019!) and snag some cool cyberpunk dice!

I then stopped by the Indie Press Revolution booth to pick up Scum and Villainy by Evil Hat Productions. Scum and Villainy uses the Blades in the Dark rules to play a spaceship crew trying to get by. I had seen a print proof at Origins Game Fair and had to get my hands on a copy! 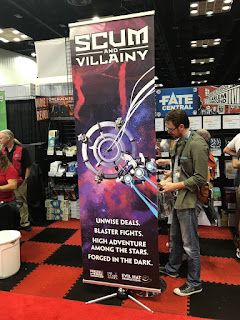 At 1:00, Monte Cook Games held their Discover your Destiny seminar. The first half was discussing Numenera: Discovery and Destiny and what to expect from that new edition. Of course they talked about Invisible Sun. Then they announced the Kickstarter for Your Best Game Ever—a collection of essays to improve your role playing game experience. 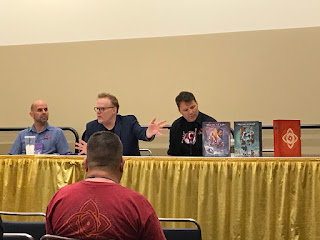 After an early dinner of a Salmon BLT from High Velocity, I headed back to the convention hall to run the two Monte Cook Cypher System games I signed up for.
First up was Cypher System - Assault on Singularity Base, a multi-table cooperative free-for-all set in your typical space opera. I ran green team, who had to assault the barracks and keep the waves of troopers from reaching the other parts of the base and keep the heat off the other teams. It was a suicide mission. I knew it was a suicide mission. I tried to convey that uphill battle to the players. By the time we took our halftime break, at least one player was frustrated with the apparently insurmountable odds. After the break, the tides turned! The other teams started sending reinforcements. May table jumped from six players to nine! With the extra bodies, they were able to lock down the barracks and escape before the base blew. Total blast Afterwards I got some really flattering feedback, that totally made up for the rough spot in the middle.

I didn't have much time to reset the table for Numenera - Forgetting Doomsday. The adventure is a tale of two war-torn villages who have to come together to save both from a mysterious mind-altering machine between them. The setup requires that players be split between the two tribes. After some initial and expected friction, they fully embraced working together in brilliant ways! Well played, folks!

Several of us finally got to play Brad's brand-spankin' new copy of Tower of Madness. It's a push-your-luck game where you are trying to investigate and "solve" locations with your dice rolls. In the middle of the table is the Tower of Madness, which is pierced with tentacle-handled skewers and topped with marbles, à la KerPlunk. If you fail to investigate properly, you have to pull a skewer. If a marble drops, depending on the color of the marble, you can gain victory points, lose sanity, or begin to summon Cthulhu! The first game didn't go so well, as we all died unceremoniously. The second game, a few of us were sprinting to go insane and try to summon the great Old One. Scott became a cultist first, but got consumed with the rest of us as Cthulhu awoke hungrily.

Friday
Due to a scheduling blunder on my part, I was late to my session of Apocalypse Road being run by the game's designer Brad Poikonen. It's a larger home-brew version of the board game Thunder Road. Even though I was late, Brad let me run the two "bad guy" tanker trucks! I didn't last long once the other players set their differences aside and ganged up on me... 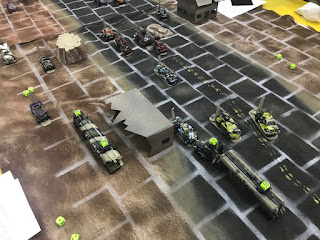 Had a quick but tasty lunch with Scott and Kristen at Café Patachou.

Back in the exhibit hall, I hit up the Roll4Initiative booth. I've been meaning to show these guys some love at past Gen Cons, so I made sure to hit their booth this year! Their main product is their dice. They're larger than your "typical" polyhedral dice and have larger numbers making them easy on old gamer eyes! I picked up three of their basic opaque sets with a buy-two-get-one-free coupon. They also had a "toss a d20 win a prize" dice tower in their booth. I rolled an 18 and won another basic die set. I had been salivating over their Diffusion sets, so I snagged one of the blue sets as my prize. Thanks guys!

Brad brought his copy of Red7, so he, Jeremy, Tyler, and I settled in to play a couple of rounds. Red 7 is Uno on Steroids. Each color has a rule and the object is to get rid of all of your cards by playing the best card following the current rule, or change the rule to give yourself the lead. Brad trounced us both times.

Saturday
So my buddy Pete Petrusha, with the help of Kickstarter backers, published Dreamchaser, a rules-light story game where any adventure is possible. I've been trying to get in a session or two and was successful this year. At the table were two enthusiastic ladies, two young girls with their father as a guide, and myself. The first task was to create our shared dream. After a brief discussion led by the GM, we came up with: “Bring the faerie dragons back to the world of unicorn mermaids.” The characters we generated ended up being (if I remember correctly) a Pigpen-esque adventure guide with a pocketful of gummi bears, a veterinarian with severe anxiety, a beautiful and politically motivated unicorn mermaid, and my artistic Victorian little girl, modeled after Brian Froud's Lady Cottington (of Pressed Fairy Book fame). We uncovered and foiled a faery dragon smuggling ring in the underwater city of Mermaid Ocean. The adventure brought quite a few giggles and "awwws" to the table.
#MakeMermaidOceanGreatAgain
This year, R. Talsorian has introduced Cyberpunk Chronicles, their living campaign. I got into a session titled, "Guns, Lots of Guns", in which we had to break into a high-security firearm and pawn shop and steal as many guns as we could carry. We had our stuff together and were able get in and get out with firearms with minimal complications.

I was left with a couple of hours to finish out my exhibit hall crawl and then met up with Brad, Scott, Kristen, and their friends for our yearly sushi dinner at Mikado. Bonus: Vic was in the area and was able to join us!

On our way back to the JW we stopped at a vacant table so Brad could introduce us to That's Not Lemonade. The first thing he pulls out of the box is a half dozen shot-glass-sized Solo cups. We were intrigued! Unfortunately, our interest quickly waned as we learned it was simply a poorly implemented push-your-luck game that didn’t even use the tiny cups.

Back at the JW, we played a couple of rounds of Codenames. I should be ashamed of myself as I had Brendan on my team and he was using all kinds of theatre references. Alas, with my brief set design dabbling, I only recognized one or two of his references...

The surprise hit for the evening was an EXIT The Game: The Abandoned Cabin. It's essentially an escape room in a box. To be honest, I forgot if we escaped or not, but we had a blast going through all the clues, scribbling on and tearing the provided materials (a pair of scissors would have been helpful), and searching every scrap for hints.

Sunday
The last day of Gen Con presented my least favorite game of the con. One of my roommates accidentally grabbed my convention badge as he was driving out of town.  Brad and I had to chase him down before one of his passengers had to catch a flight! Sleep deprivation followed by an adrenaline surge does not make a fun game.

The reason getting my badge back was so important was because I had a slot in “Mike Pondsmith Kills Everyone,” a Cyberpunk 2020 RPG one-shot run by the great Mike Pondsmith himself! True to its title, I did not survive the mission. Hell, I didn’t survive the AV crash landing! Fortunately, Mike let those of us who died early run some of the opposition. Definitely an experience. I’m so glad I was able to get a ticket to Mike’s table (and didn’t miss it due to the badge fiasco)! Thanks Mike! 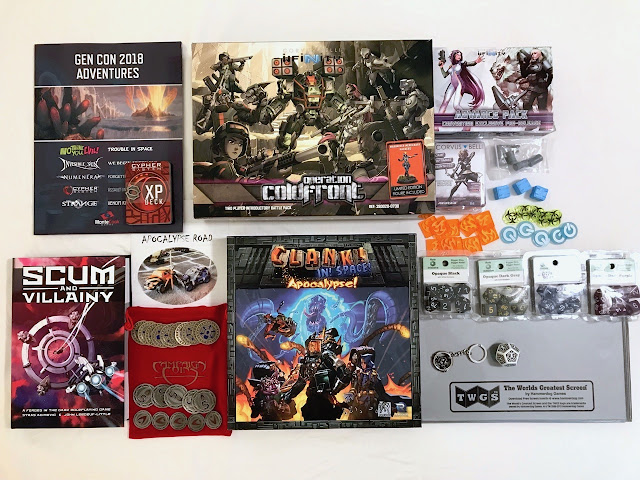 Seeing as it has been taking me sooo long to post these, this may be my last Gen Con recap...